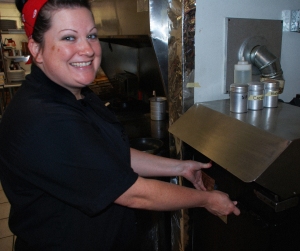 Monica Carvajal-Beben (Mo) literally grew up in the restaurant atmosphere. Following in the footsteps of her grandmother who owned a pie shop in Oklahoma for many years, her mother opened a diner when she was just 5 years old. Mo spent much of her youth serving tables and helping where she could in the kitchen. Never feeling more at home than she does in a restaurant environment, thirty years later she’s still in the kitchen duplicating and recreating the recipes from her youth.

Through college study abroad programs she expanded her study of the connection between food and culture in travels through England, Ireland, Scotland, Belgium, Switzerland, Luxembourg and Mexico. After meeting her husband, Tom, in college in South Carolina, the new couple spent the next several years exploring the culinary craft of the Carolina low country and Southern United States before moving to the west coast.

Mo received a Bachelor of Arts degree from Coker College in 2003. Her professional restaurant experience includes work in casual, fine dining establishments and high profile catering companies in Oklahoma, South Carolina and Los Angeles. She rounded out her food and beverage training in hotel event management in Charleston, South Carolina in 2005.

Mo volunteers as a Shelton-Mason County Chamber of Commerce Ambassador and serves on the board for The Human Touch Chefs Group.

life of a girl boss